by KOF
in Interview
0

Alex Andreev is such an artist living in Saint – Petersburg, Russia.  He has a series of photographs and art that seem almost dream like, called “A Separate Reality”.  His work is so unique, it has even been chosen as artwork for magazine, Book and CD covers.

Some of his works are featured in “Skazka PRO” – the book of Sergey Zharkovsky, New Scientist Magazine, The Tool Up – CD cover, The short film “The Rabbit” – poster and other book covers such as Michio Kaku – “The Physics of the Future”, books by Ivan Efremov, Ol’ga Slavnikova – “Light Head” and many others.

Alex, how is life in Russia and can you tell us how you began your career in art and photography?

I’ve known since I was a child that painting is the most interesting occupation for me – , so I have never had a problem of choice in this matter. In this sense, I’m a lucky man. I have been learning to paint my whole life. I was born in a small town with a very good art school. Thanks to my teacher, I realized what I want to do in my life, what is the most interesting thing for me. All questions for me boiled down to one – what kind of visual art would be the most comfortable for me.

I was educated as graphic designer and was engaged in advertising and design for a long time, worked in big advertising agencies as a head of design studios. And a few years ago I found a way to start a career in art and make a living at doing this. And now I am working on movie and TV projects, doing concept art, painting covers and illustrations for different books. 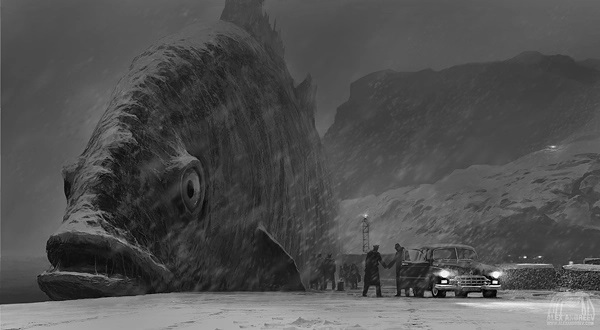 You certainly can`t forget your home town.   Most vibrant impressions are from childhood, and I reimagined them by placing fantastic events in a familiar environment.

I’m deeply in love with USSR literature, music and movies. There are a lot of old Soviet songs in my playlist. I can even claim than I’m enamored by the aesthetics of soviet period.  That was an interesting time, now long gone, and endless space for ideas. I could care less about politics, though —  it does not concern me.

The “Separate Reality” Series of works is very interesting. How do you come up with your ideas and content?

“.. the nagual Elias went to his dreaming journeys the way a wild animal prowls for food… visited, let’s say, the junkyard of infinity… and copied whatever he saw, but never knew what those things were used for, or their source”. 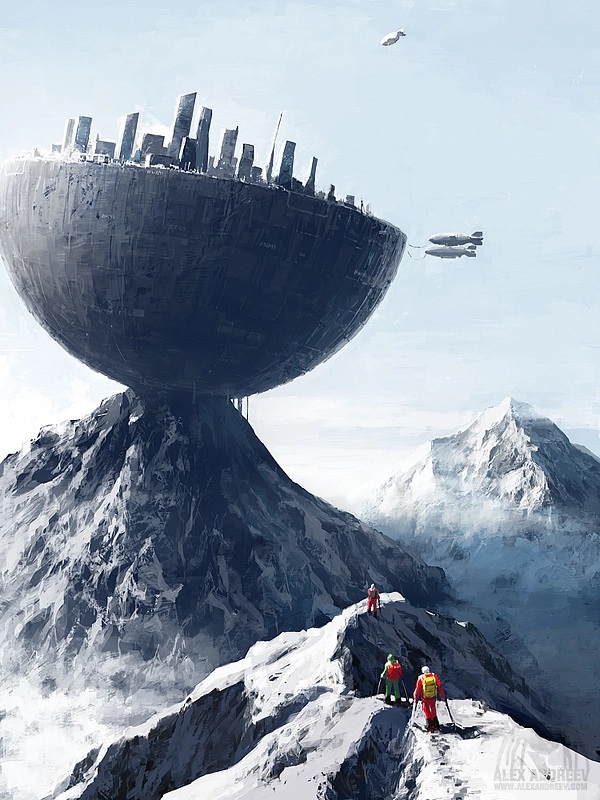 These Carlos Castaneda’s words from his ‘Power Of Silence’ are the closest description of my perception of creation process. Never did I – and never will – take the creation as a product of man’s intellect. Instead I take it as activity aiming to fix certain states of comprehension I experienced in my childhood, in my dreams, etc. David Linch would define this as the journey of the intuition.

I never discuss how this mechanism works – I am inclined neither to mysticism nor to intellectual speculations. However, the human brain is the most complex thing ever created in the Universe, and our conscious awareness is only a thin-film in the ocean of unconsciousness. Everything is possible in this ocean. I work and I get back to those states of comprehension, to my childhood memories, to my dreams. I experience them again and again. This is my only motivation to do what I do.

I see many of your works feature interlacing of insects and sea creatures. Do you have a special fascination with these creatures? 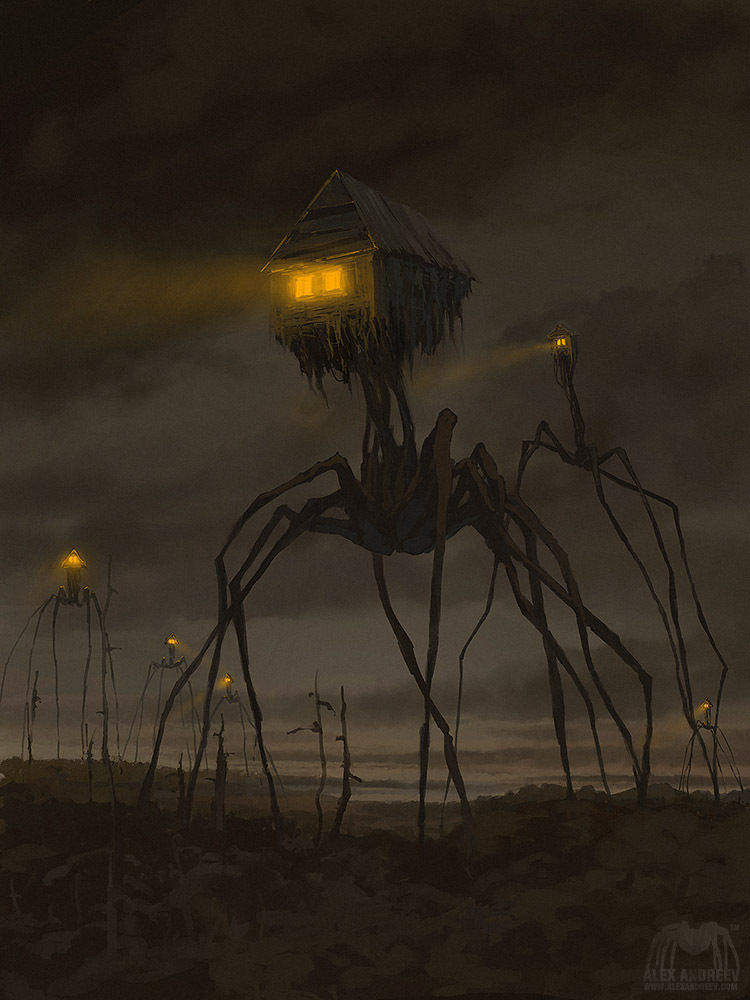 In my childhood I very much was afraid of spiders. One day I realized how I can stop my phobia. Only curiosity and admiration can win my fear. I managed to begin to love them. I can tell the same about my fear of height, so a lot of events in my pictures occur in the sky. 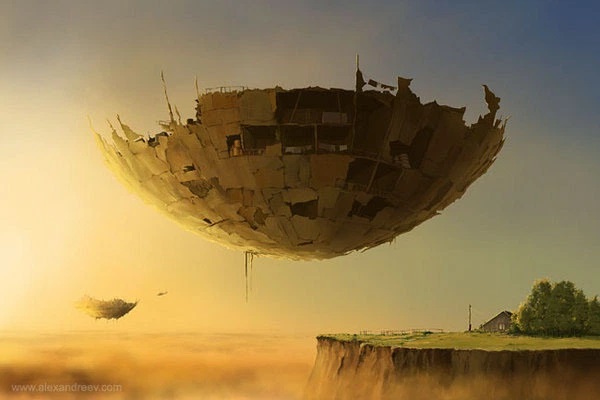 What is your favorite medium for painting and illustration?

Initially, I was educated as a graphic artist. And for a long time I was doing traditional graphics, but wasn`t satisfied with the results.

Ironically, digital painting is interesting for me because it has no influence of technology. Why that happens? For me the influence of technology for traditional fine arts (such as limitations and styling in the graphic arts, a long period of the oil paints drying, etc.) was overwhelming; it was limiting my freedom. In addition, oil painting needs a separate workshop, also does the etching –. Besides the acid is harmful for the health.

A lot of various troubles distracting me from creative work. If I do not see immediately the result of my work, the snapshot of consciousness simply does not happen. But in digital painting I’m just taking the stylus, drive it on my wacom and immediately, here and now, can see the results of my work.

In Adobe Photoshop I can’t see any technology at all, I may not pay attention to it, and for me it is the most suitable, almost perfect technique.

I see you have won the “Asian Oscar” with the film “”Koo! Kin-Dza-Dza!”. How did you did you transition into film with your artwork?

Kin-Dza-Dza is a motion picture film based on the soviet movie made in 1986. When the movie came out, it influenced me a lot, and I was happy and proud to work on this remake. This movie was being created by the original movie director George Danelia, who is very famous in Russia and one of my favourite film directors. 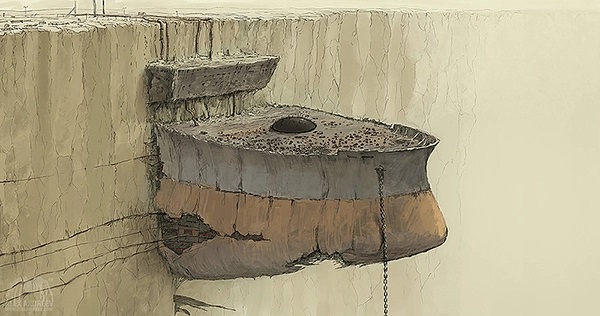 Happy to say – our film “Koo! Kin-Dza-Dza!” is the winner of the Asia Pacific Screen Awards 2013 (the “Asian Oscar”)! I was the senior concept artist on this project and drew hundreds of concepts for the film. Film action occurs on a planet “Pluk”. It’s a planet-desert. There lives the rests of the hi-tech civilization which have gone through full cultural collapse. © Alex Andreev

The film is about the fall of human culture, and my job is to develop landscapes, constructions, mechanisms and devices. One Day Georgy Danelia just called me and invited into project. I loved to work with him. When I worked on the movie, I had to learn digital painting – before I worked in traditional techniques.

Do you have any particular art work where the message stands out the most?

I don’t have any favorite work – I don’t like most of them, I see all bugs and mistakes.

In some of my dreams, I have experienced large and majestic objects coming into view. Have any of your works come from dreams?

My dreams always inspire my works. 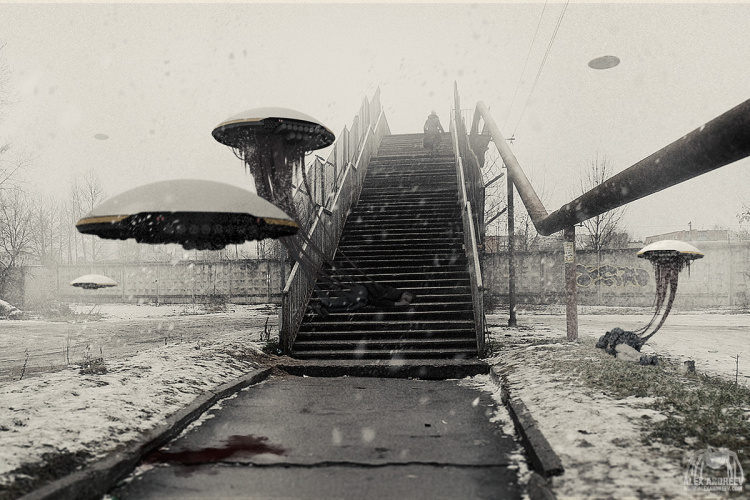 Instead of Winter – A Separate Reality 13 © Alex Andreev

For several years (after reading Stephen LaBerge) I practice lucid dreaming. This is a very useful practice, which I recommend to everyone. Lucid dreaming (a kind of paradoxical sleep) – a free ride with virtual reality immersive own world where everything is possible, the ideal environment for creativity.

Your book, A Separate Reality has been published. How can we order this book and what stands out most about this project for you?

Unfortunately all copies of my art book have been sold one year ago. Now I’m thinking about the new one.

Alex Andreev lives in St. Petersburg, Russian Federation and was born in 1972, Russia. He’s been drawing, painting and doing graphic design over last 20 years. He works as art-director in advertising agency and as senior concept artist for movie and game production.