by KOF
in Interview
0

Andreas Englund is a swedish artist who has famously created the life and times of the aging superhero. The series ranges from the superhero’s first mission as a toddler to being an old man, still struggling with everyday trivialities. His large oil paintings are humoristic in design and detail. He now is based in Stockholm, Sweden.

“The super hero concept turned out to be an inspiring concept/theme and it has opened doors to other routes and motifs – contributing to define the kind of artist I am today.“ 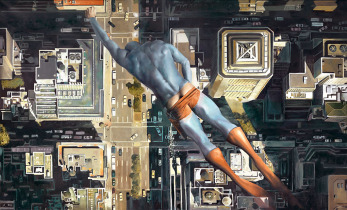 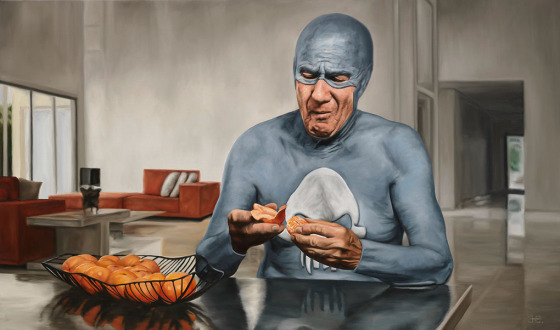 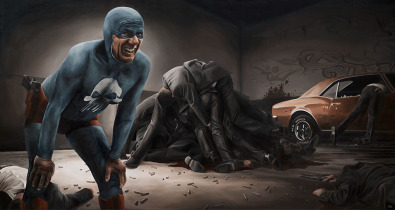 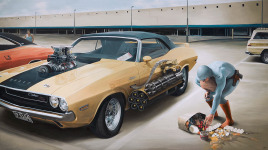 Andreas was born in Falun, Sweden. He creates a number of differing oil paintings including themes of horses and muscle cars. The horses are painted as dalecarlia horses, a famous symbol from the Swedish region of Dalecarlia, where Andreas was born.

“Working with communication became a natural choice for me since I´ve always wanted to share my thoughts with others. Either through conversation or visual media I want to share insights and thoughts, experience and humor. My foundation is based on storytelling and communicating.”

I recently contracted Andreas about The Life of a  Superhero series and other works.

What is your training and study in art and what inspires you to create large oils on canvas?

My foundation of studies is based on my profession as an Art Director with focus on communication and concepts, working with any kind of media. During my education I had subjects as Crouquis , Art History and design which has helped me as an artist. I have also taken one semester courses in Oil painting , Aquarelle and sculpture. You could say I’m mainly autodidact since I never went to any art school.

My sister went to art school and she inspired me to try to paint with oil on canvas.  The bigger size just felt natural with the motifs/ideas I wanted to portray. 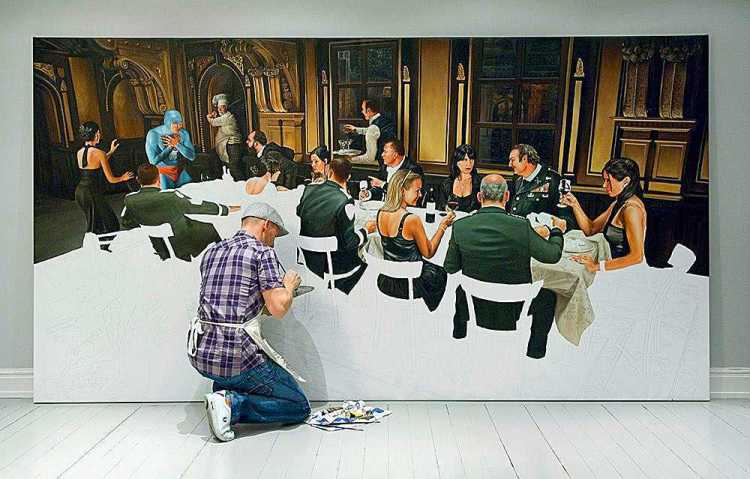 What was the inspiration behind the Life of the Superhero series?

I have always been inspired by the human body which led me to the world of greek classic sculpture. From there the ”modern” greek hero – the superhero originated. In my case I wanted to portray the human aspects – not being perfect and the superhero became the natural symbol to dramatize these flaws – since he is suposed to be more or less ”perfect”.

A number of your works in this series are also Wall Murals or a sort of ‘Street Art’. Such as your recent “Dirty Laundry” mural. Are these works permanent or an advertisement of sorts?

My street art work are so far my own ideas and creation. The ”Dirty Laundry” mural got it’s appearance since it was located in a mall as a pop up wall and I wanted to use the surroundings to be a part of the idea. Therefore it ended up being a laundromat with the looks of an installation rather than a regular art wall. 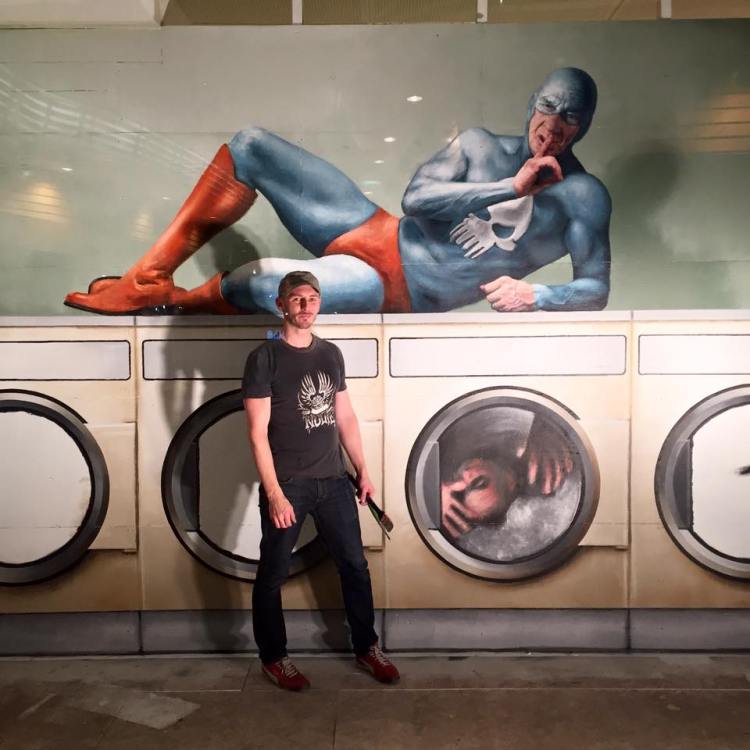 Some of these was have been temporary and some permanent so it’s a mix. I think there are a lot of walls in my city that could be made into fantastic art and I look forward to do more commissions on walls both in Sweden and abroad.

Who is the model for the superhero or is it from your imagination?
He is based on me and my father. He then became more personal to me and through him I can portray my own shortcomings.

Your exhibitions and paintings are quite famous in Stockholm. What has been your best received works?

From the feedback I got one of the favorites is ”Sunday” where the superhero has his day off but still there are guys that want to mess with him.  In this case there are two ninjas suppressing him in a serene forest where he is gathering mushrooms. 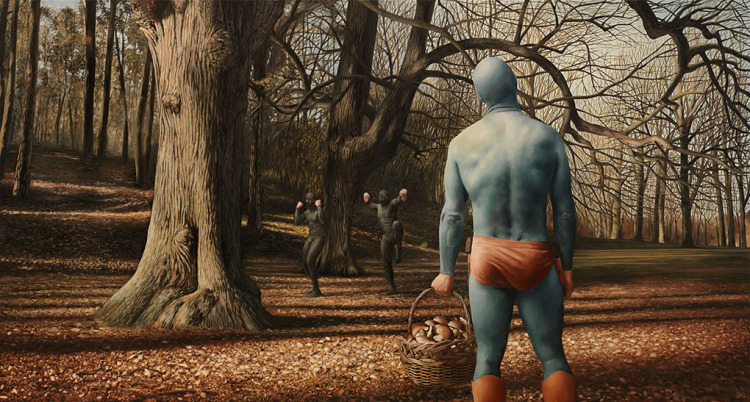 The content of your paintings in the series is quite humorous.  You seem to have a great sense of humor. Do you see a fitting end to the superhero series?

So far I see no end to the superhero series although I’m doing other concepts.

I have planned to take a pause from it but I discovered it’s harder than I thought. since a lot of people are asking for him. I like to see myself as a positive person and I rather see the humorous side of things than the serious and often negative side. There are already enough people portraying that aspect in all medias and I feel I need to take a break from all of that misery now and then.

In that sense I think humor is a great tool to connect with people and to give/share positive energy.